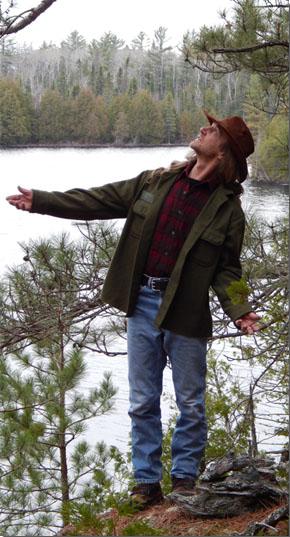 The Neverending Song is always there, a haunting melody or hum hidden deep in the core of the sound tapestry reaching our ears, simultaneously seeking and directing life. In unplanned moments, a songwriter bridges the gap between worlds, hears a Neverending Song, and a classic is born.

One evening, years ago on the ninth day of a solo canoe trip deep in the Boundary Waters Canoe Area Wilderness, I arrived at a campsite where pines grew out of cracks in the smooth folded rock along the shore of a little rounded point. The spot was so beautiful that I was lured into putting my tent right on the exposed shoreline rock beneath the pines, breaking all the rules I knew about shelter placement. Surely, a storm would not arise on this perfect peaceful night. Sitting in contemplation on the shore at dusk, I gazed out over the lake and felt such utter perfection and balance. I had the distinct feeling of arriving, of finally finding that which I'd been seeking, or perhaps that it had found me because I'd finally slowed down enough for it to catch up.

I awoke in my tent around midnight to rumbling thunder, lightening, and a storm moving in. Soon, sheets of rain and great gusts of wind began lashing at the tent from all directions. I felt as if the storm were attempting to throw me off this rock to which the tent couldn't be staked. I was the only "stake" holding it down; the erected tent was like a sail at the mercy of the wind. For a long while as I attempted to hold down the tent's four corners with my limbs I felt an illogical fear, as if this were a personal attack. Eventually the wind lessened and it just poured rain. It had all felt like a battle. I drifted off to sleep amid puddles on the floor.

In the early dawn I awoke to the distinct sound of a fiddle playing a melody which is still with me to this day, like a movement of my soul. Its sound was so enlivening, heavenly and beautiful. I couldn't figure out where such a fiddle sound would be coming from with no one else around.  For a long while I lay there dumfounded. My logical mind had hit a chasm: on one side was the inventory of life experiences by which it judged and negotiated pathways through each new experience. I was on the other side of that chasm consciously experiencing something for which my personal inventory had no explanation: a beautiful and distinct song played on an exquisite solitary fiddle, deep in the wilderness. I kept checking to see if I was actually awake. Finally I made the decision to go out and step back into the forest to take a leak. As I moved and kept listening to the fiddle, I realized the early morning songs of birds were superimposed on the fiddle. Then all at once it hit me. The sound of the fiddle was composed of all the bird songs put together! Great realizations which to this day I am still uncovering were opened to me at that point. As I got back into the tent I realized I could choose to listen either to the unique fiddle song, which seemed to be a product of all the bird songs put together, or hear the bird songs separately, or listen to a combination of the two. I laid there for hours enraptured with my ability to hear in this way, playing with moving from the fiddle to the separate songs to the combination.

Afterwards, at first I thought I had been hearing something like a harmonic created by all the birds singing together. Yet, as the months went by and I thought about the event, physically and musically the "bird song harmonic" explanation didn't quite make sense. On that morning, the fiddle song had continued on exactly the same, even as new birds would chime in and others would stop singing and move on.There had to be something more, something spiritual going on, something beyond the physical.

Subsequent experiences and realizations have further refined the explanation of what happened at the camp on the rock....

Read more...
X Close On another long canoe trip in the BWCAW, it was mid day at a beautiful camp in the interior, the wind singing through tall virgin pines and cedars in the surrounding forest. Bird calls were minimal. All around in that section of forest, I began hearing an exuberant song being sung or played. Over a period of many hours, I kept asking Jessi, my partner, if she could hear it. She could not. The day was exquisite with the wind, sun, and pines, and all she could do was appreciate my rapture at this music which would not stop and which I couldn't turn off. I became fearful that I was going crazy.

Then something happened that offered a big chunk of explanation. Bird calls were very sporadic at this mid afternoon time of day, but as I listened to this  exuberant song being sung or chanted, I noticed that the timing and pitch of the occasional bird calls were in perfect sync with it. I realized that the birds could hear it too! That's how they could sync up with it. They were singing to it more than creating it. Then I no longer felt so alone in what I was hearing, and my fear of lost sanity abated; after all, the birds could hear it too. I have subsequently begun calling it the Neverending Song. It is indefinable to me, but always there at the core of our existence. The birds, animals, wind and water do not totally play the Neverending Song, yet they are aware of it, part of it, and respond directly to it. It's more like it plays them.

Years ago I began recording nature sounds, especially in the BWCAW. Combining them with some of my albums, I made another discovery. I would seek out the one particular nature soundtrack out of hundreds of choices to combine with one of my songs. When I combined it with the song, I realized that the pauses and accentuations of the nature track usually lined up perfectly with those of the song! It hit me then that the reason for this natural synchronization between my music and nature's Baseline Symphony is that the Neverending Song is the place that I have always been inspired by and written from. I believe it is where many inspired works of art come from. I cannot construct good melodies but the Neverending Song can. I simply perform the service of listening. The price for the service of listening is hearing the bad along with the good, the dissonant songs of non-life along with the harmonious Neverending Song. The price for the good stuff is the awareness of the bad. Denial of our awareness of the dissonent songs is what keeps us separate from the best of our creativity and allows the destruction of the Earth's health to continue.