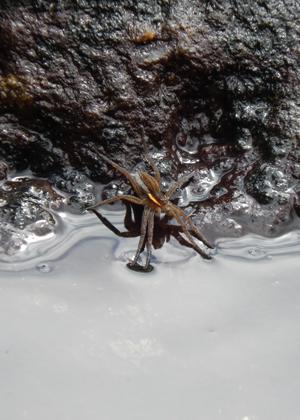 ".... dawn is breaking on a springtime day, nature's waking

and the birds all say, 'good morning,  it's good to be alive'"

Joe Paulik - Free For A Day

"Baseline Symphony" is a phrase Tom Brown Jr. uses at the Tracker School. It refers to the degree of sounds and movements in nature which are typical for any area on the landscape, at a given time. Some of the main conditions governing this sound and motion are time of day, the season of the year, weather conditions, and pollution. In the more natural areas, the Baseline Symphony can be like a magnicficent musical composition, capable of relieving stress and inducing a state of joy. To me they are riveting, expansive, and stress relieving.

All landscapes are unique. In becoming accustomed to the Baseline Symphony of a particular area, we then set ourselves up to notice the variances, to learning nature's sophisticated language. We belong to the land. By learning its baseline symphonies we respect that ownership, and in respecting it, open ourselves up to a two way communication with it. The Baseline Symphonies offered here are segments of real time news from the wilderness. Tom often refers to a quote from Grandfather which states that awareness is the most important skill we can possess. Finding the spectacular in the so-called mundane is key to this most vital skill of awareness.

Baseline Symphonies can be studied in a way similar to how we learn and internalize musical compositions. Not so much by memorization at first, but by noticing patterns and attitudes in the fluctuations of sound. Eventaully, by knowing what is typical, we become aware of any deviance from the norm. If someone plays a deviant note in a song you know really well, you notice it immediately. If you don't know the song, it is hard to be sure of the deviant note.
Generally speaking in the natural world there is a large increase in bird songs and animal activity during the sunrise and sunset hours. Conversely, from mid day to the early afternoon hours, and again overnight, bird songs are typically at a lull. By being familiar with this, one would instantly know something was up if suddenly there was a spike in bird sounds at mid day. That spike could mean many things, such as an indicater of an oncoming storm or the presence of a predator. By also learning the "symphony of the disturbance", we can pinpoint the reason for that disturbance at its earliest indication, thus gaining foreknowlege of dangers and opportunities as well as what is going on in general. Tom Brown jr. is a master at reading baseline symphonies and their disturbances. To read about it, I recommend his books, particularly the chapter "My Frankenstein" in "Case files of the Tracker".

Everything has a baseline symphony. Chances are that if you have a spouse or a pet, you can instantly read their moods. By the quirks and variances of their symphony you can tell what they will do next. A stranger won't have a clue to what those quirks mean....

Read more...
X Close That's because you've spent time learning their baseline symphony, and what the variances and disturbances of it mean. An auto mechanic diagnoses the particulars of an engine by its sound because he or she has mastered so many baseline symphonies for engines. I've mastered the baseline symphonies of certain things and am in the process of applying those principles to nature. By applying these principles to nature we gain access to an astounding amount of vital information. Disturbances to the baseline symphony move across the landscape like the concentric rings formed on a still pond when a pebble is dropped into it. Thus, a loon call can indicate an eagle over head. A sudden burst of alarm calls from sparrows can indicate the presence of a predator. An out of context Chickadee call can indicate an impending storm.

I have not mastered reading any but some of the the most rudimentary aspects of baseline symphonies in Nature, and am unqualified to say much more about them. I have other reasons for offering recordings of them here. I've learned that listening to them can reduce stress and promote a wondrous meditation. Playing recorded natural symphonies can help create a positive atmosphere in many scenarios, whether at home, in a health clinic, at work, or at public places like restaurants and shops. A great deal of our stress and unease as humans is caused by our constant inundation with the sounds of the destruction of our environment, which is, ultimately, the destruction of ourselves. In today's world, recording nature without the sounds of motors, jets, or machinery is a challenging endeavor. The Boundary Waters area in Minnesota provides great opportunity to find such environments.

Many of us are aware of our own "Nature Deficit Disorder" and long to get to the wild places to escape the constant chaos. The symphonies presented here can relieve some of that ache and longing, as well as provide the inspiration to protect the wild places or go to them. They are sound snapshots in time. Their magnificence may be hidden at first, until we realize that they are exciting stories being told in real time. By opening ourselves to the awe and wonder of the so called commonplace, we become more able to find ongoing fulfillment in our immediate environments. Many creatures and their communications are present even in the cities. The ability to read and be fascinated by their ongoing strories can save our sanity during 50 weeks of non-vacation time each year. By finding such fulfillment we are no longer sentenced to the prison of waiting for the chance to go to places like the Grand canyon or Yellowstone in order to jar our senses with wonder and awe.

A great way to learn the baseline symphony of an area is to find in it what the Tracker School refers to as a sacred area. This is simply an area on the landscape where you feel most peaceful and right. By going to the same spot day after day, the birds and animals there become accustomed to your presence and begin to act more naturally around you. It's great to go there and reflect in the morning and evening when the symphony is often at its peak. It's also good to eventually go there at all times of day and night to get used to the ebb and flow of the symphoniy. In this way, the baseline symphony teaches itself.

I've found out myself and by hearing from others that just listening to recordings of baseline symphonies teaches much about nature and all the stories and communications going on there. I believe that in part this is because the prejudice of the eyes is removed. The sounds have an air of mystery to them. The question of what they are and why they are made becomes alluring. Our imagination brings us many questions that we normally don't ask. It is the mere asking of these questions that does much of the teaching about these symphonies. However, listening to recordings runs a distant second to actually getting out to your own sacred area and learning the fascinating and extensive language of nature.
X Close